Choo choo! Tickets please! And all aboard the Mum’s Grapevine Express!

If you have a train buff in the family, then NSW has some train-themed destinations that will fuel their enthusiasm. Whether you’re after the old world charm of a steam train, or the buzz of a model railway, there are train experiences to excite every child (and grown-up!)

Make tracks to these 11 railway-themed destinations in NSW. Puff, puff, toot, toot and off you go!

The locomotive that pulled NSW’s very first train is now stationed in the Powerhouse Museum. Kids can peer inside carriages and inspect every nut and bolt, then stop by The Wiggles exhibition downstairs for a rendition of toot toot chugga chugga big red… train?

Step back in time at Timbertown. All the olde worlde attractions are interesting, but train fans will be most chuffed about the heritage railway. Ride the steam machine and look out for special guest, Thomas the Tank Engine later in 2016.

Ride the steepest passenger railway in the world! The Scenic Railway has a 52 degree incline, but you can choose how steep it feels, with ‘Original’, ‘Cliffhanger’ and ‘Laidback’ seat options.

Trainworks railway museum is home to the ultra popular Day Out with Thomas (check the website for upcoming dates). And for the rest of the year, there are trains on display, a holographic show, a locomotive ride and school holiday programs. Train-lover heaven.

5. It’s a small world after all

About an hour from Sydney, All Aboard‘s model railways are incredible. Kids will be taken with the tiny trees and towns, but it’s the moving trains that provide maximum entertainment in miniature. 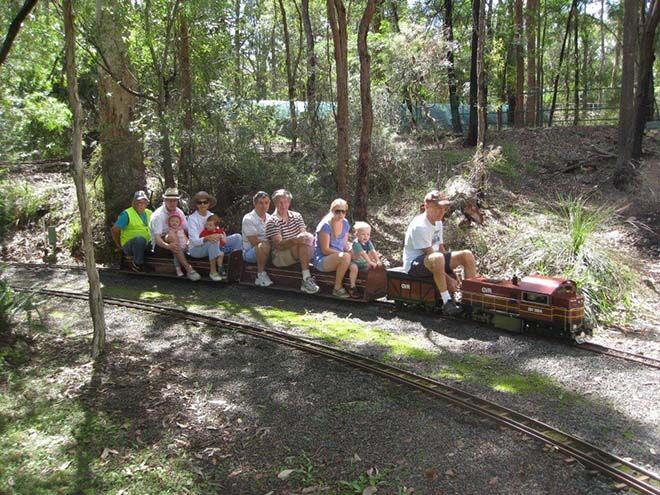 Tiny toot toots all round!

Make like Melbourne and ride a tram with the Sydney Tramway Museum. Their vintage tramline winds its way into the Royal National Park, taking tram buffs through the bush and back. (Ok, we did notice this isn’t an actual train, but close, right?!)

Riding the Rails takes you on a 30 minute ch-ch-ch-chug around Newington Armoury, so there’s plenty of time to hum the Chuggington theme song while riding the Heritage Train! Open every Sunday.

Anywhere with toys and trains is a hit, so head for the Leuralla Toy & Railway Museum in Leura. Model railways and a mini-Matterhorn mountain take kids on a trip to the Northern Hemisphere.

The Illawarra Light Railway Museum is train central. With steam and non-steam locomotives, passenger cars, rolling stock and a miniature railway, this place feels like the Island of Sodor!

Sunday is a fun day to travel on Sydney’s trains and light rail. With an Opal card you get unlimited public transport travel for $2.50 each. Explore the rail network till tired kids give the signal to stop! The easy train-themed destination.

Posted in All, Kids, New South Wales, Where to go and tagged Sydney, trains.

‘Schitt’s Creek’ star Sarah Levy has announced that she is expecting her first baby with husband Graham Outerbridge. Sarah (35) made the announcement to her […]

With newborn babies come days filled with cuddles, special moments – and nappies. Lots of nappies. If you’ve made the decision to use disposables on […]

‘Osbournes’ star Kelly Osbourne has announced that she is expecting her first baby with boyfriend Sid Wilson. Posing for a selfie with her ultrasound scan […]

When it rains, it pours – but that doesn’t mean active kiddies have to stay indoors. A great kids’ raincoat is bright, waterproof and perfect […]