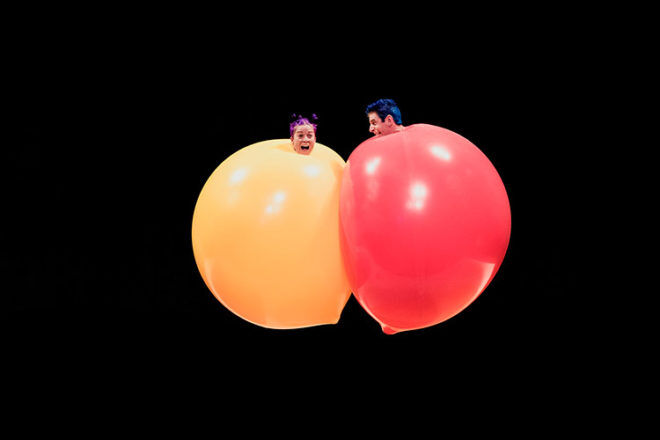 Get ready for high-flying laughs of a lifetime!

The hilarious world-famous clowning duo from New York, the Acrobuffos, are heading to Melbourne in January to take us on an epic comic adventure filled with breathtaking air sculptures and laugh-out-loud physical comedy.

Air Play marries comic physical antics with breathtaking air sculptures to create a spectacular performance as hilarious as it is heart-warming. Flying umbrellas, larger-than-life balloons, kites that float over the audience and an enormous snow globe are the constant companions of a sister and brother, played by Seth Bloom and Christina Gelsone, whose rivalry is only matched by their affection.

The mesmerising high-flying and ground-breaking air sculptures are mixed back with a beautiful colour palette you’ll just have to see! And if you hadn’t guessed, Air Play is an intended pun. Besides physically playing with air, the show’s soundtrack spins the radio dial, creating an auditory “air play” which leaps from Balkan gypsy music to a Nordic boys’ choir, Italian avant-garde and Appalachian ballads.

So let the curtains open and feel like a child again as this cheeky but heartfelt storytelling keeps both you and your kiddo enthralled – and laughing out loud!