Fairy bread is a dinky-di Aussie childhood treat that’s guaranteed to light up the eyes of any little one.

A thin smear of butter and a deft sprinkling of hundreds and thousands and it’s a party on a plate. In celebration of this national icon, we’ve hunted down 17 of the most adorable, delicious and clever fairy bread finds – they’re utterly irresistible.

Can we have one of everything, pretty please with sprinkles on top? Fairy Bread Print ($20): A perfectly sweet addition to the nursery wall for your little sprinkle. Ready to get your sew on?! You can make these cute-as-a-button sew-on patches yourself to jazz up anything your heart desires. Give the kids some fairy bread jeans or socks – the possibilities are endless! (via My Poppet Makes) Fairy Bread Puzzle ($50): There aren’t quite hundreds and thousands of these sprinkles, but just enough to get little minds going. This fairy bread puzzle looks almost good enough to eat. Joeyjellybean Romper ($32.95): Baby so cute you could just eat them up? They’re going to look even more delicious in this sprinkle-covered baby romper. Fairy Bread Cushion ($29.99): Perfect for a pretend picnic with a giant, this fairy bread cushion toy is just the trick to brighten any kiddo’s room. Fairy Bread Washi Tape ($10): Give the craft box a colourful boost with a roll of fairy bread washi tape – it’ll go down a treat on birthday presents and school craft projects. A cool and colourful treat, turn humble fairy bread into a real showstopper by making it into the ultimate ice-cream sandwich. (via Aww Sam) What’s more delicious that fairy bread? A fairy bread pinata full of treats! This is such a clever idea – and could even double as a kids’ costume. (via Studio DIY) Fairy Bread Pool Toy ($69.95): Make a splash on this giant fairy bread pool – lazing around in summer has never looked so sweet! What happens when you combine two iconic Australian treats? These delectable creatures, that’s what. (via Taste) 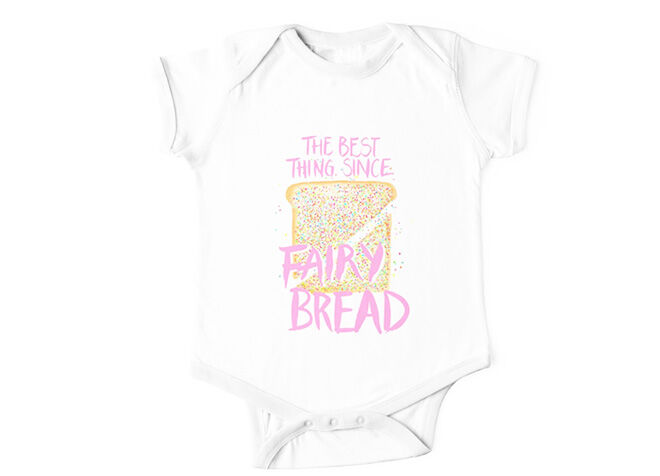 Fairy Bread Onesie ($26.49): Because you know your babe is just the best thing since ever, this adorable little onesie lets everyone else know too. Finally, if you’ve had a bit of a fairy bread overload (perish the thought) switch it up with this bite-sized fairy bread cookies. (via Sprinkle Bakes)

May your day be sweet, colourful and topped with sprinkles.