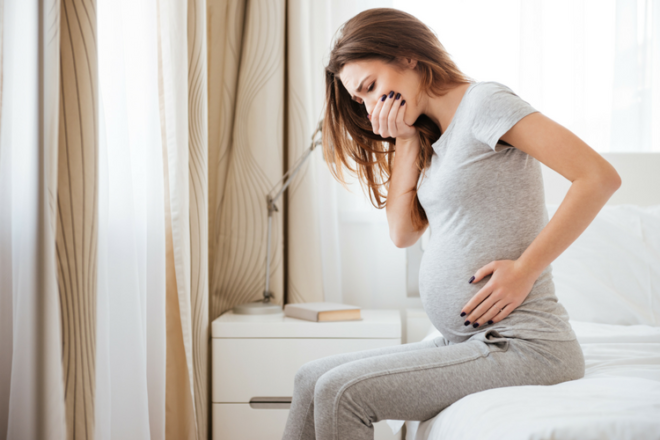 Feeling a little green around the gills? You’re not alone – more than half of all mums-to-be will experience this stomach-turning pregnancy symptom.

Don’t be fooled but its name, morning sickness can strike at any time throughout the day, and can last well beyond the first trimester. Good news is, recent studies have revealed that it’s actually a positive sign in early pregnancy – and linked to lower risk of pregnancy loss.

But what exactly is morning sickness, and why it is a good sign in pregnancy?

What is morning sickness?

Morning sickness is a feeling of nausea, loss of appetite and vomiting, which is often worse earlier in the day during pregnancy. It usually kicks in around the four-week mark and tends to go hand-in-hand with feeling pretty tired in the first trimester and can leave you feeling pretty miserable.

One in five women will continue to suffer from morning sickness beyond the 14th week of pregnancy, and some experience it right until the birth of their baby.

“Lasted until week 16 and it was all day not just ‘morning’ sickness.” – Hannah

“Mornings were OK, dreaded the rest of the day. Lasted from the sixth to around the 12th week. Couldn’t drink water, tea or coffee but couldn’t get enough of grapefruit and pineapple juice.” – Linda

“I had it all day for the first trimester then it continued every morning for the whole pregnancy including labour!” – Amy

“First and third pregnancy from day one until last day. Had to be on medications and they still didn’t help much. Second pregnancy not even once.” – Medina

Yes it is. A recent study by the National Center for Biotechnology Information (NCBI) showed evidence that nausea and vomiting during pregnancy are linked to a lower risk of miscarriage.

The researchers believe it could be a way for our bodies to tell us what to eat when pregnant, or it could be related to the pregnancy hormone HCG.

We still don’t really know. Changes in hormones, blood pressure and altered metabolism could all lead to morning sickness. But you can take some comfort knowing that it’s really a good sign.

No it won’t. While it’s unpleasant, morning sickness won’t hurt you or your baby. But if you do find your morning sickness is on the severe side, you can experience weight loss and dehydration so get to the doctors. And if you find that you can’t keep any food down at all, you could be suffering from severe morning sickness, called hyperemesis gravidarum, which can pose health risks to you and bub.

When will morning sickness end?

You’ll probably start feeling better early in the second trimester, and you’ll find your stomach settling down and your appetite returning (with a vengeance!). It will usually disappear somewhere between the 14th and 16th week of pregnancy, however some unlucky mums-to-be experience morning sickness throughout their entire pregnancy.