Expressing colostrum: what you need to know Breasts change a lot during pregnancy. Tender boobs can be one of the first signs that you’re growing a little human. Then they get larger and look a little different. The colour of the nipples and areola gets darker. Nipples may stand a little more to attention than usual. And from the 16th week of pregnancy, breasts begin to make colostrum.

Colostrum is the first milk produced by breasts, and it’s pretty powerful stuff. It’s packed with antibodies and immunoglobulins – all aimed at protecting teeny babes as they enter a germy world. Interestingly, it also helps newborns get rid of their first bowel movement, the meconium.

Expressing colostrum before giving birth is becoming increasingly popular, so here’s everything you need to know about collecting to storing breastmilk before the baby is born.

Why express colostrum before birth?

Colostrum is designed to be bub’s first feed, but sometimes births don’t quite go to plan. Which is why so many mums are now hedging their bets and storing their colostrum while still pregnant.

Lactation consultant Susan Shaw says babies born to mums with diabetes are at risk of having low blood sugar levels after birth. So having expressed colostrum on hand can avoid the use of formula, and help stabilise a baby’s blood sugars.

“Also, some babies have a strong family history of dairy intolerance or inflammatory bowel disease, so having extra colostrum to use will be beneficial.

“Some babies are diagnosed antenatally with various conditions (cleft lip and/or palate, congenital conditions e.g. Downs Syndrome, cardiac conditions) which may make it hard for them to breastfeed, so they may be needing to have extra colostrum 0n hand to use if needed.”

When to start expressing colostrum?

Do not express if:

You have a history of, or are currently experiencing, threatened or actual preterm labour, cervical incompetence or you have a suture put in your cervix to prevent preterm labour.

How to express colostrum 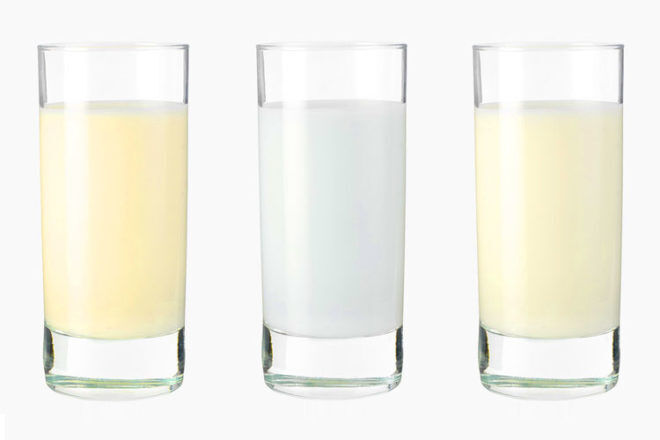 Colostrum can look very different, both in colour and consistency. The colour can be, pale, clear, yellow, cream, brown or orange.

It can be sticky and thick or thin and watery.

For storage of colostrum at home you will need 1ml-5ml syringes, zip-lock bags and labels

How to take it to the hospital

If you’re headed off to have your baby, put fresh or frozen syringes in a cooler pack with frozen ice bricks. Once you get to hospital ask for it to be placed in a fridge. Once it defrosts it must be used within four hours and it cannot be refrozen.

Won’t my colostrum ‘run out’ before baby is born?

The short answer is no. Your body will keep producing colostrum until your milk comes in, so it won’t run out or be used up by the time bub comes along. Catherine Leask decided to express her colostrum before birth, sharing her story with other mums-to-be in one of Mum’s Grapevine’s Due Date and Baby Groups.

“Being older, having a traumatic birth resulting in emergency caesarean last time, and booked for an elective this time, I thought what a great idea – not that you want anything to go wrong but you certainly want to be prepared. Better to have it and not need it than need it and not have it!”

Catherine admits it was daunting at first, but after chatting with lactation consultants she felt more at ease.

“They prepared me well by showing me the technique on a crochet boobie! The kit supplied by them had everything I needed including a very easy to follow instruction sheet. Initially, I managed to get half a ml, but by day three, I was filling the syringe in a few minutes. I could have easily filled two or three in the recommended 10 minutes!”

She says having the colostrum on hand helped her newborn settle and gave her a breastfeeding kickstart.

“We used the colostrum the following morning after bub was born. She slept for hours! I think expressing must have helped with bringing in my milk. The midwife mentioned that the process of labour triggers the milk coming in, however, being a caesarean, milk can be delayed a little. I definitely recommend the process but most importantly – get in touch with the lactation consultants at your hospital as they are the experts and a treasure trove of information and support!”