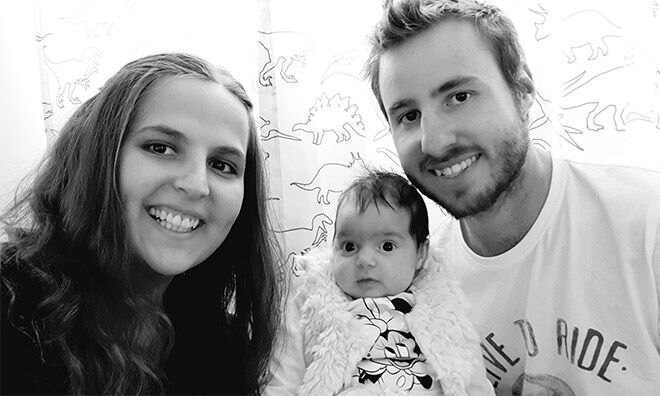 A first-time mum, Meekay Schultz didn’t know what to expect when it was time to give birth, but it certainly wasn’t 27 hours in labour, a failed epidural and tachycardia during the delivery.

Meekay and her partner of seven years, Tim, weren’t trying for a baby, but also we’re not trying – so it was a pleasant surprise to discover after a holiday that they’d brought home an extra souvenir.

“We weren’t trying to get pregnant but we also knew it would be possible,” Meekay told Mum’s Grapevine. “A few months earlier the doctor recommended that we go off contraceptives and give my body a break as I had been having issues with the Implanon then the pill didn’t work either, I had crazy mood swings, weight gain and excessive bleeding. We both agreed that we would be ok if it happened.”

The couple didn’t conceive straight away, and actually thought they may struggle to have a baby due to Meekay’s hormone issues.

“We went on a few holidays and after our last trip to New Caledonia we came back and our dog was acting really strange around me and my stomach (our dog has always loved my partner more). Well, five pregnancy tests and a doctor’s visit confirmed we are having our first baby. Our first child, the first grandchild for our parents and the first great-granddaughter for our grandparents.”

Early labour: the start of a long journey 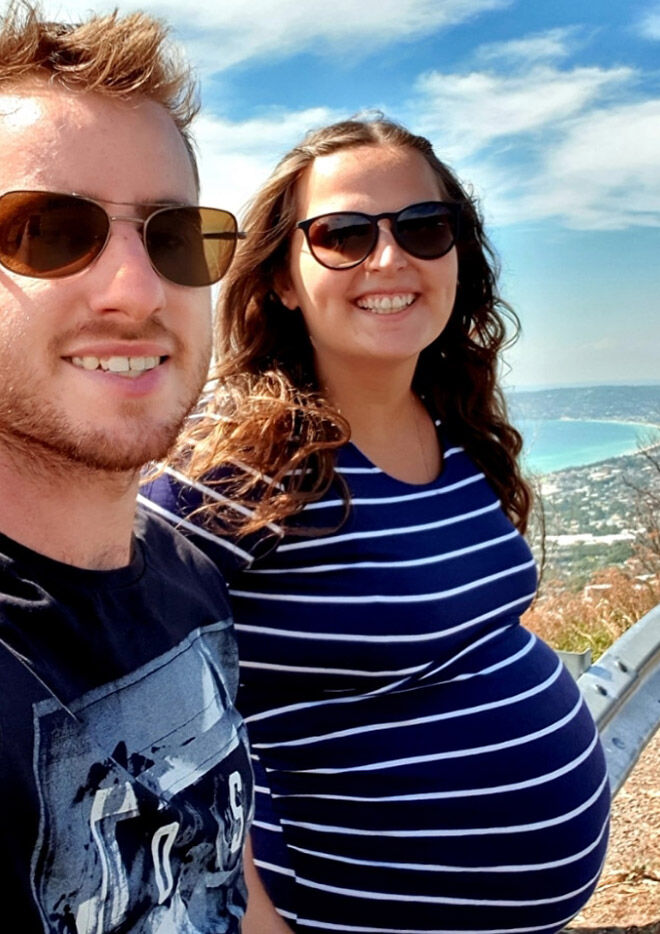 At her 36-week appointment, Meekay was advised against driving on her own, in case the baby arrived early. She was ‘babysat’ around the clock, which meant she went on the daily school run with her mum, to pick up her sister.

“One Thursday I stood in my usual spot waiting for my sister to walk out and on came some contractions, hiding how serious they felt I pushed through them but I made sure to tell my partner he needs to head over to pick me up from mum’s ASAP.

“We got back home and I called the hospital to let them know I was coming in. We headed to the hospital and they said it was only Braxton Hicks but I had lost my mucus plug and sent me home.

“At 1am that morning the contractions started regularly and my support team were told their time to shine is now.  Contractions were five mins apart and lasted a minimum of 30 seconds, this is where I was super grateful for having my partner, mum and sister in law. All day they called the hospital to give them updates while I sat in the shower or bounced on the yoga ball and absolutely refused to eat.

“As a first-time mum we were ready for bubs to be overdue so everyone quickly rallied together setting up the cot and change table so we had somewhere to come home to. My mum stocked up our fridge and things got really real!

“One thing I will never forget is how tired I was, I had two people help me into the bath and there I was sitting through the pain, the bath was so effective I managed to have a nap. When I woke up what we thought was my waters broke and off we went to the hospital.” 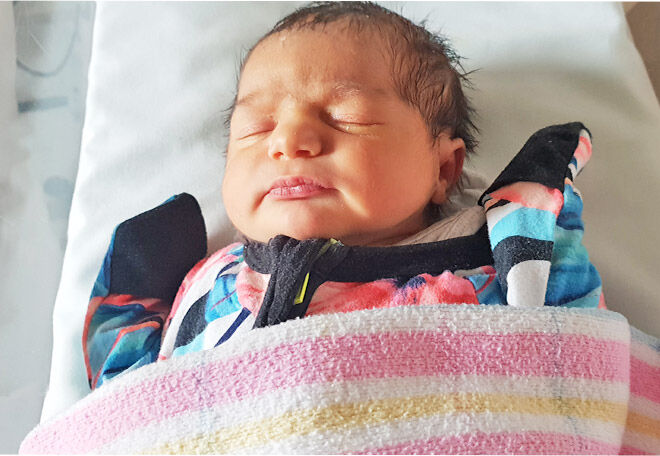 Things soon ramped up once Meekay and her birthing team arrived at hospital and were ushered into the birthing suite. But before she could go any further, the first-time mum had a big decision to make.

“My mum and I had a little bit of a rocky relationship in our earlier years so my first big challenge was when she asked if she was allowed to stay once we got to the suit, I had always intended for only my student midwife, partner and sister to be in the room but in a spur of the moment I made the best decision I could have. Having my mum there was truly one of the best decisions I’d ever made!

“She was so good in reminding me that I don’t need to put up with the pain just to be brave, so on came my first round of morphine and anti-nausea meds. At this stage I had been having contractions for 12 hours becoming more and more regular and painful but I was only 4cms dilated. As a first-time mum you want to be prepared for everything so naturally, you packed snacks in your hospital bag, baby brain is so real that snacks are just about the only thing I packed. I couldn’t even tell you what I packed but I know my support team really loved it!

“Fast forward to my second shower at the hospital I could barely move, bubs was sitting so low I had my first moment where all dignity was lost when I had to ask my partner to come put my underwear on for me. Crying because I thought I should be able to take care of myself and apologising for everyone who had to see me like this.

Then came one of the most beautiful things my partner ever did for me, because I only packed snacks and PJs in my hospital bag (big tip for next time would be to have someone without baby brain check that you actually packed clothes for yourself) my partner gave me the socks he was wearing so I didn’t have to have cold feet. To him, it must’ve been nothing as they were just socks but to me, it was a big deal. After getting some new socks we all managed to have some sleep, all except for my mum who sat up watching me sleep as the only position I could sleep in was sitting up on the hospital bed. Yup, sitting up legs crossed in the middle of the bed like I wasn’t worried about falling off or anything.

“After managing to get what felt like no sleep at all the midwives were back in to check everything out, still having not progressed further than 4cm I got my second round of morphine for the pain and had my waters broken. I wouldn’t say that was my favourite experience, wet warm liquid everywhere, blood and the feeling like I’d done about a week’s worth of pee everywhere but it was needed to get bubs out so there we were. After this, there was no more sleeping so needless to say I was pretty annoyed when my support team all had their naps.

“The next morning rolled around and I had finally given in and asked for an epidural, I went against what my partner and I discussed beforehand as I had now been having contractions for a day, had no sleep and I just didn’t think I could do it. Turns out the anesthesiologist wasn’t available for a little while. Half an hour passed as I told the midwife I won’t make the epidural and that the time has come, although she didn’t believe me as last time they checked I was only 5cms.” 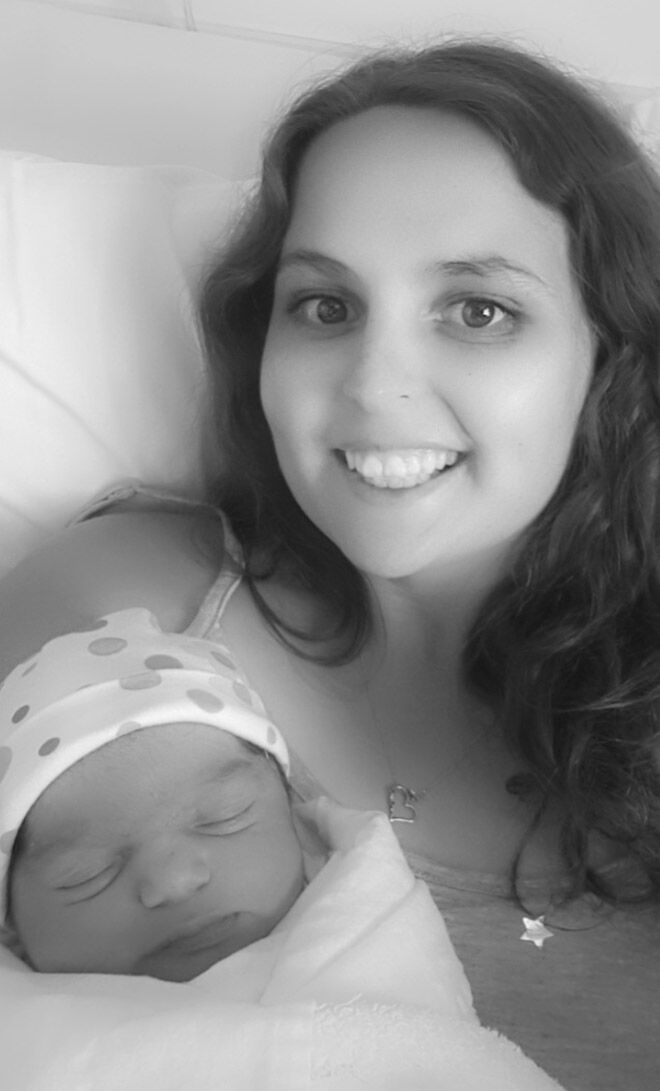 As things really started to heat up, there was another dramatic twist, with Meekay’s heart rate causing concern.

“Here is where things got a little crazy, bubs and I were hooked up to a heart monitor each and every time I had a contraction this machine would go crazy, beeping so loudly. As a first time mum who had never been in hospital I imagined it was just to tell them I was having a contraction, little did I know it was my resting heart rate sitting at 200bpm.

“As I was unaware of my heart and in incredible pain when I was finally told I could have the epidural I was ready. It was at this point I kicked my partner and his sister out of the room, who in their right mind talks about how hungry they are while there are machines beeping, people telling a pregnant lady to calm down and an epidural that just wasn’t working! We had four attempts at getting it in but my contractions were so regular that it just couldn’t happen. That was the worst thing I was told that day – after 26 hours of contractions, an hour of waiting for the epidural and I couldn’t have it, I felt like I couldn’t do it, like I should’ve just gotten a c-section because what if after all of that pain I needed to get a c-section anyways.

“While I was panicking about that I suddenly had a few more midwives in the room, they were there for that heart rate machine that kept beeping. Apparently, they were trying to find a cardiologist for me and my resting heart rate that wouldn’t go under 200bpm, no wonder my mum and the midwife kept telling me to calm down. I just thought the machine had to beep, turns out though when the midwife thought I was only 5cms and prepping me for the epidural I was actually closer to 10cms and I was ready to push.

“Next minute I was flung into a different position and it all started, I was told to push and on came the screaming. I still remember my mum so calmly asking if she needed to go get my partner. If he couldn’t work out that the screaming meant I needed him, I didn’t need him, is what I told her. In came my partner, his sister and about 12 other people ready to help deliver this baby.

“Mid push walks in a student doctor I saw a few times while pregnant, while being told to push but not scream (I was screaming anyway) this student doctor asks if I remember him, yup good time to have a chat about remembering someone. I told him that I did but I’m just a little busy at the moment. ”

Twenty minutes of pushing later and there was my little baby, looking over at my partner who couldn’t even look when I did my GD blood test he was on the business end watching her come out. I was disbelief that he watched it and didn’t pass out! Everyone around me is crying, couldn’t quite work out why but while I was admiring my partner they were admiring my new baby, a baby that had been placed on my chest without me even noticing.

Oh, and I did take a moment to chat with the student doctor while he was delivering my placenta.

“I couldn’t believe that I just had a baby! The next bit was a little bit of a blur, honestly, it felt like the universe just sent out a signal that the baby was born because messages were flooding in and I suddenly had visitors too. Hadn’t even gotten up to pee (not a major issue as I did had to have some assistance with that before having bubs because I couldn’t go in my own).

“After having some salad sandwiches and a shower that was it, we were sent downstairs to our new room for the next few days and our parenting journey began.”

Phew – now that’s a dramatic birth! If you enjoy a birth story with a dramatic twist, we have quite a few articles to get your heart pumping: