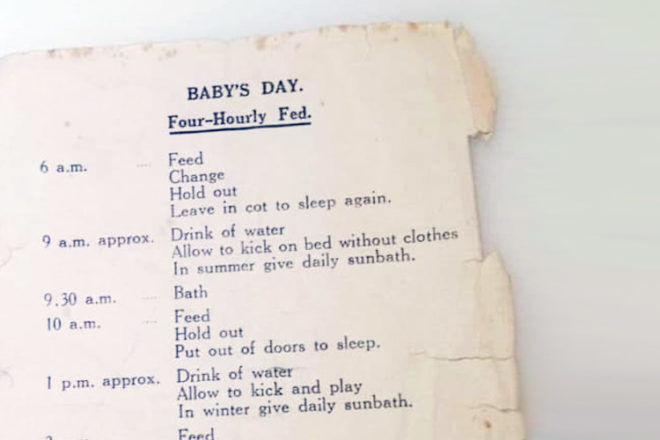 The torn and weathered page, which was reportedly taken from a parenting book in the 1950s, has gone viral after it was originally shared in one of Mum’s Grapevine’s Facebook Baby Groups by member Rhiannon Briggs. Rhiannon explained the piece of history was shared with her by her mum, who’s a bit of a history buff. After the baby advice was shared on the Mum’s Grapevine Facebook page, comments flooded in, with people completely bewildered by the bizarre advice.

The page, titled Baby’s Day, points out that baby should be fed every four hours, starting with a feed at 6 am, followed by a change and then a ‘hold out’. Which it’s not clear exactly what this means, many of the comments suggest it means holding the baby over the toilet, elimination communication-style.

The deeper into the day the schedule goes, the stranger the advice becomes. There’s a morning bath, followed by more ‘holding out’, and then a nap outside. There are also drinks of water (which is not advised before six-months-old) and a daily spot of sunbathing. In winter. It’s highly probable this book wasn’t distributed in the southern states of Australia, where sunbathing days in winter are few and far between!

There’s also the controversial suggestion of giving baby orange juice and going out for a spot of ‘mothering’. Then there’s the second bath of the day before the night routine, which involves putting bub to sleep in a room with the window open. Again, very different times!

Daily routines with a baby constantly change, but here are some handy articles to help you get the nighttime right: