Chainsaws were actually invented to help with childbirth 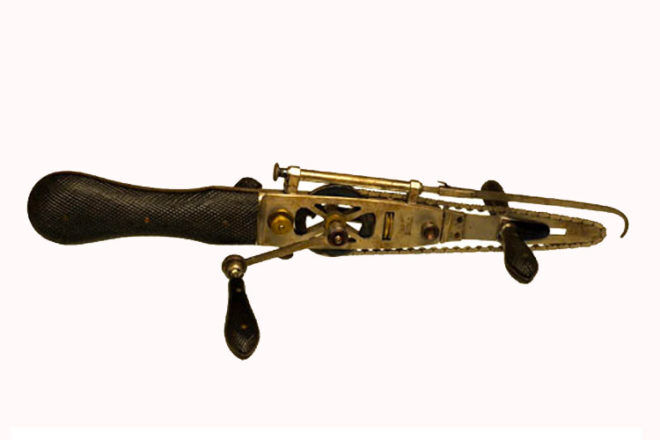 From the strange-but-true files comes the real reason chainsaws were invented – which has nothing to do with cutting up wood, and everything to do with getting babies out of mummas.

We’re about to delve into the dark world of childbirth in the 1700s when a couple of guys thought removing part of a woman’s pelvis was the best way to birth a big or breech bub.

If the thought of an epidural needle or episiotomy has you squirming in your seat – best look away now.

Why were chainsaws invented? Let’s go way back to the 18th century, when two Scottish doctors, John Aitken and James Jeffray created the hand chainsaw. It had a fine, serrated link chain and was powered by a hand crank – and it was used to cut through diseased bone.

Eventually, it was also used for symphysiotomy – a controversial procedure to increase the size of the pelvis to help get a baby out. Symphysiotomy involved cutting through the cartilage and ligaments of the pelvic joint, sometimes even the bone of the pelvis, to make it wider and help a baby be delivered. Initially, this was done by chiseling at the bone by hand using a saw and knife. Drs Aitken and Jeffray invented the hand chainsaw to help make the procedure easier. While symphysiotomy sounds like a completely barbaric and out-dated procedure, it was actually still used up until the 1980s.

Thankfully, doctors eventually realised that c-sections were a far safer and less painful way to birth babies who were large or breech. And eventually, a much better use for the chainsaw was discovered – sawing through trees and wood. Praise be.

Want to know what actually happens during birth? Head to these articles next: