It’s been nine months of dreaming, hoping and waiting for your little one to arrive and now you’re wondering if today is the day you’re going to meet. A niggle there, a twinge here – mumma bodies are amazing at giving subtle early labour signs towards the end of pregnancy.

You may get your first labour sign hours and sometimes even days before the big event. A bit of cramping here and a backache there are common first signs that labour is starting, but many mums experience the more unusual signs like feeling nauseous or a sudden burst of energy and need to clean the garage.

According to Better Health, there are three stages of labour – the latent phase, the active phase and the transition phase. Early labour, when you’ll experience these symptoms, is known as the latent stage of labour or the first stage, and it may last a while.

During the latent phase, your cervix is becoming soft and thin in preparation for baby, and this isn’t usually a quick process. In fact, it might take hours, or even days. And there are nine common signs that labour is starting. You haven’t had your period in nine months, but all of a sudden it almost feels like Aunt Flow is arriving! For many expecting mums, period-like cramps are the first sign that labour is getting started. These pains or cramps could feel mild and dull, or be pretty uncomfortable from the get-go. You might feel these cramps in your lower abdomen or lower back or it could feel like pressure in your pelvis – some women even describe it as a ‘heavy’ feeling.

But here’s the kicker – while it does mean things are starting, it’s part of pre-labour, one of the three stages of labour . It could mean you’re a couple of weeks away from giving birth, or only a few hours. If it settles down, don’t get too disheartened, your body is well on the way to getting ready for labour and birth and meeting your baby.

“I had really bad abdominal pain, so bad it woke me up, and in my still-mostly-asleep addled brain, I thought I needed to poop. By the time I got to the bathroom, the pain was gone. So I went back to bed, but exactly 10 minutes after the first one, I got a second awful pain. It was my due date so I put two and two together, and correctly came up with f0ur … and a baby eight hours later.” – Elizabeth M 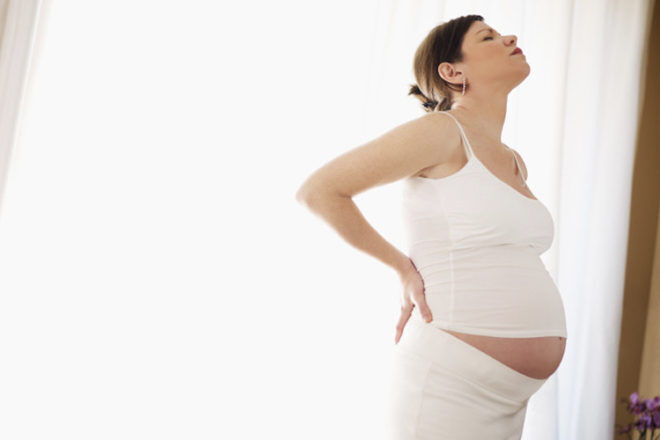 You’ve probably experienced your fair share of pregnancy back pain over the last nine months, but this backache is different. Instead of being a sharp pain, it’s more of a lower backache. And if you pay attention, you’ll probably find that the ache is coming and going in a consistent pattern.

The reason your back may be aching is because your body has been releasing pregnancy hormones to relax the pelvic floor ligaments. It makes everything nice and loose for baby to travel through, and it’s your body getting ready for what’s to come.

“I had backache and stayed at home all day shattered, but didn’t know I was in labour until midnight.” – Jasmine B

There are a whole lot of pregnancy hormones doing all sorts of amazing things in your body, and just before labour they start to change. This is so certain muscles relax and loosen, ready for your baby to make their way through the birth canal. As well as relaxing muscles in your uterus and cervix, the muscles at your bottom also loosen. And hello, diarrhoea!

There are some experts who believe pre-labour diarrhoea is triggered by the release of prostaglandins. It’s your body’s way of making sure your little one has plenty of space as they head on out, and gives your uterus the space to contract during labour.

“I had diarrhoea with both my kids the night before I went into labour. There’s a hormone that does this to empty the bowels to allow the uterus to contract efficiently. I thought I was sick with the first baby. With the second I knew what was coming!” – Eden C Feeling a little bit icky down below? You may find something a little strange in your underwear, but it’s good news – it probably means labour isn’t too far away. The mucus plug is what’s been sealing your baby safely inside your womb for the past nine months. As labour approaches, your body starts to discard it, and it’s sometimes called a ‘show’.

It may look like a gunky pale, creamy glob of goop in your underwear, and it could even be streaked with a little blood. This sometimes happens when it’s released from the cervix – but if you’re concerned just contact your midwife or doctor. Losing your plug could mean that labour is already underway, but sometimes it’s just a sign that it’s on the horizon – maybe a few hours or even days away.

If you notice more than just a tinge of blood, contact your midwife or doctor.

“My first sign was the loss of my plug. It looked like a huge ball of clear snot and happened not long before labour started.” – Rosie L

A gush or trickle of water It’s the age-old, end-of-pregnancy question – have I wet myself, or has my waters breaking? The movies would have us believe when our waters break, it happens in a giant gush. But it’s not usually so dramatic.

For most of us when our waters break, it’s actually more like a slow trickle, which makes it tricky to know if it’s just wee or actually amniotic fluid. The way to tell is to check the liquid (it helps if you pop on a pad to ‘catch’ some). If it’s yellow and smells like ammonia, it’s most likely wee. If it has no smell or actually smells sweet it’s probably amniotic fluid.

“It was Mother’s Day, I was watching both my stepdaughters play in the yard and their dad had just left for work when I thought I’d peed my pants a little. But when it kept happening every few minutes I realised my amniotic fluid was slowly leaking. It was a 35-minute drive to the hospital and by the time I got there, I started feeling the light period like cramps of contractions. 12 hours later I had a baby girl!” – Nichole E At the pointy end of pregnancy, it feels like every little twinge could be the start of contractions. Or is it just Braxton Hicks?

Braxton Hicks are practise contractions, it’s your muscles putting in a few rounds of warmups before the real thing during labour. They usually only last less than 30 seconds but can last up to a couple of minutes. They don’t have a regular pattern and won’t ramp up and get stronger. They’re also not usually painful, more or a tightening and squeezing.

Real contractions last anywhere from 30 to 45 seconds, are regular and get stronger and stronger. They can sometimes feel like cramps and tightenings, but the thing to look for is the intensity getting stronger and a regular pattern.

“The contractions I’d been having on and off for a few weeks became regular.” – Michelle R

An urge to go to the toilet Constant peeing and pregnancy go hand in hand, but you may find you’re spending even more time on the loo as labour approaches. Baby’s head is in a low position as they’re getting ready for action, and it puts more pressure on your bladder, so don’t be surprised if you’re speed waddling to the toilet constantly.

Some experts believe that the body ‘clears itself out’ just before birth, so an upset tummy may also be a sign of things starting. Even passing wind may be the body’s way of labour prep.

“When my labour began I had mass amounts of pressure like I had to do a really big poo.” – Sarah T Feeling sick to your stomach? A little nauseous? No, it’s not morning sickness starting again, but it could be the start of labour. There’s not much room around your gastrointestinal tract thanks to your expanded uterus, which is why you may feel like throwing up.

The mix of hormones, including the increase of prostaglandins, could also be making you feel a little yuck in the tummy.

“I felt like my entire insides were clearing out just before I started getting contractions. I vomited and had diarrhoea which were both really unusual for me.” – Kate P Take a look at your baby bump side on in the mirror. Does it look different? Some women experience what’s known as lightening when the baby’s head drops into the pelvis ready for birth. It may make your bump look lower, or like it’s ‘dropped’.

Also, if you’ve been finding it difficult to catch your breath because baby has been right up in your ribcage, you may suddenly realise you have a bit more room to breathe. Phew!

We also asked the huge community of mums on the Mum’s Grapevine Facebook Page what they experienced at the start of labour, and while not necessarily based on science, these signs are interesting:

Cravings: You’ve probably experienced pregnancy cravings, but as your body is preparing for labour you may suddenly have a hankering for something unexpected.

“An unexpected and intense craving for a McDonald’s cheeseburger.” – Tara L

Sore muscles: Some mums describe feeling like they’ve pulled a muscle in their tummy, others feel soreness in other areas.

“Growing pains in my upper legs that didn’t go away. Both times.” – Melissa A

Mood changes: Again, mood swings are nothing new for expecting mums, but how about being taken over by a wave of happiness in early labour? We’ll have what she’s having!

“The night before I went into labour, I was ridiculously happy and couldn’t wipe a stupid grin off my face. My MIL told me it was a sign I was about to start labour. I laughed at her. She was right.” – Katy S

Loss of appetite: Some mums say their appetite takes a nosedive just before going into labour. It may have something to do with your body trying to clear itself out just before labour, thanks to pregnancy hormones.

“My first I was 40+3, the night of I didn’t feel hungry at dinner time. Then at 3am needed to go toilet, then a half-hour later felt like I needed to go again but nothing. Went back to bed then contractions started and was go from there.” – Toni K

Nesting: Feel like you want to clean all the things? Sudden burst of energy? Some mums say their pregnancy nesting kicks in just before the go into labour.

“I went on a cleaning frenzy! I wanted everything perfect, which was strange because everything was already clean. I eventually realised I must have been nesting, as I gave birth the next day.” Freya T

If you’re still unsure whether or not you’re in labour, contact your midwife or doctor to talk through what you’re feeling and your options, or go straight to the hospital for a check-up. This is particularly important if you’re feeling the urge to push or have any blood loss.

Exciting times mumma! If you’re close to meeting your baby, jump into these next articles to help you prepare:

Find out more about labour signs Want to find out more about early labour signs? Join one of our Facebook groups and ask thousands of other mums what they recommend. They are grouped together by baby’s birth/due date so everyone is going through the same stages at the same time.